A week ago we returned home from a week in Anchorage for a Town Run.

As we drove out, we waved to passersby on The Road (our 60-mile dirt “driveway” that leads to the “town” we live just outside of). 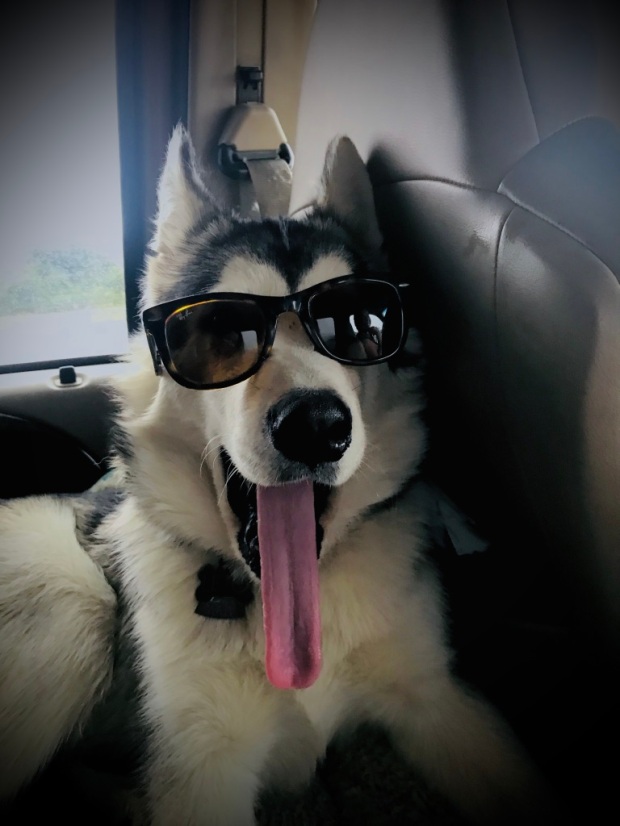 Around here, we wave to everyone. Everyone does. It’s a sort of natural reflex we all seem to feel out here. Everywhere I go, every person I pass, I wave a greeting of “Good day”.

Yet, that’s not true.

As we hit the pavement, the waves continued…until at some point they didn’t. Around 4 hours into the trip they just stopped for both of us automatically. It wasn’t due to waving fatigue, those muscles are strong, (waving fatigue, a real killer. But, like I said, we are seasoned wavers) it was something different.

By the time we reached Anchorage, waving was no longer a part of my repertoire, it wasn’t even a consideration.

Perhaps it’s due to the reality that even a seasoned waver might get fatigued with all the faces to greet in a big town. Perhaps it’s the fact that in all likelihood, you’ll never again see most of the people you wave to in a city whereas in the woods, you may not know the person but in all likelihood, you eventually will. Maybe it’s because in a city we are all too busy. Maybe it’s because a city feels as if it belongs to no one and a small town feels as if it belongs to everyone. Everyone gets a Mayoral wave. Maybe it’s because out here we are rarely anonymous and out there we almost always are. Perhaps I’m just missing the wavers. Perhaps they’re waiting for me to wave first.

In all the hustle and bustle of Town, contemplating waving fell far back in the line of things to do and I promptly forgot about waving altogether. With our wedding date fast approaching and a litany of lists of To-Dos, and the simple fact that we were in Town, my contemplation didn’t get much deeper than How Do We Do Every Single One of These Chores Done in Not Enough Time to Do Them? and Oh No, I Forgot to Eat Again! What’s Close and Quick?

Town is a jungle for us. We navigate our way through traffic and hike through lines of people. We get cut off and passed at 90 on the freeway. It’s intense going from one extreme (where I swear I haven’t driven over 30 mph in months) to the next but in all honesty, the place gets a bad rap. There’s a great art scene, delicious restaurants, fun cocktails, and beautiful trails. The truth is, it gets a bad rap because we rarely get to enjoy the benefits of Town. It’s in and out and rushed all the way through. 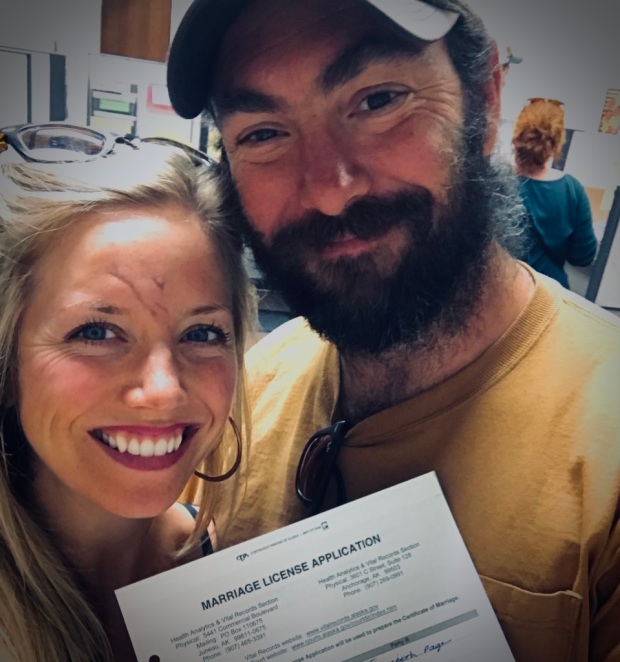 Chores galore. Even this became a chore…but we did enjoy ourselves.

We ended up staying at our best AirBnB yet tucked next to a sweet little creek on a trail system with salmon swimming upstream and ripe raspberries prime for the picking in the backyard. It was tranquil and idyllic and still we had next to no time to try to soak in the meant to be mini-vacation (unless, of course, you consider walking your dog at 11 pm soaking it in because damned if I wasn’t going to walk the trails, even if it did have to be after a 12-hour chore day). It wasn’t all rushing, we did get to see some great friends, try a cardamom cocktail(!) and enjoy some delicious eats, just all with a steady level of hurry packed in with them. 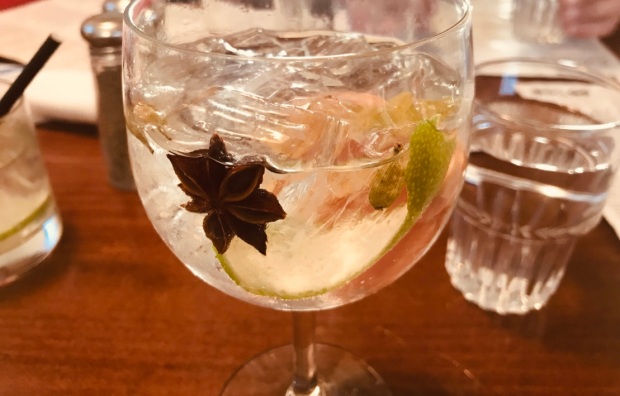 After our unanticipated week in Town (we meant to be there for 2 days but realized we had chores enough for 10) we were beyond ready to be Home. We hit the pavement, leaving Anchorage at a bright and early 12 noon. Ouch. The 8-hour drive stared at us menacingly, but we didn’t care. We were pointed in the right direction.

It’s funny how quickly we can change, adapt, forget. Within 7 days I had gotten used to getting a mid-day coffee or chai and so as we drove towards Home I pondered which I would order when we stopped for coffee…

In the middle of nowhere?

As the city fell into our rearview I realized I was 4 hours out from the nearest coffee shack which just might be open when we got there. In just one week I had forgotten that a coffee stop wasn’t just a few streets away at all times.

This time, the realization that we weren’t in Town was a joyous one. Having to pee in Town means lines, people, sometimes a purchase, waiting. Having to pee in the woods (or at least on your way) is a simple switch of a blinker and a slow down. The Chief pulled the truck over and Leto and I each found our spot and within a minute, we were back in the truck, back on our way Home. 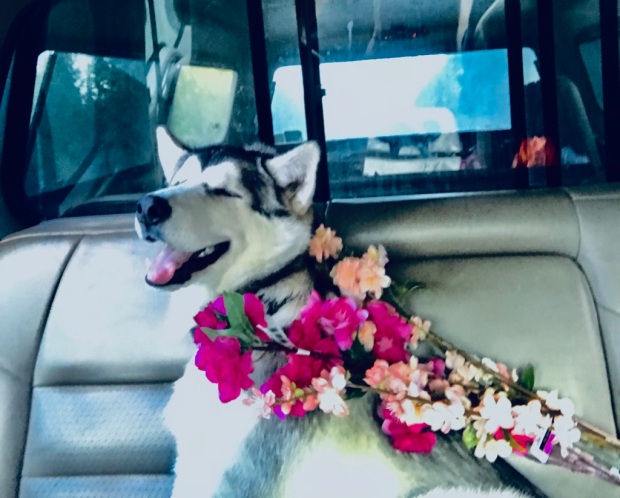 Happy puppy, tucked beneath a mound of flowers.

Within a week I had gotten used to some aspects of Town and forgotten the way we do things. The new normal happens so fast.

Four hours or so into our drive, it happened.

And the stranger waved back.

It hit me then. I hadn’t realized our waves had stopped in the city until that very moment. That wave brought me back all that we were driving towards. To the calm I feel out here. The connectedness.

Don’t get me wrong, I love me some city time. I love the art and the culture and the variety and sometimes the anonymity but I also love predictability. Friendly familiar faces. I love the wide-open spaces and the feeling of being known, even by strangers. That simple wave, that automatic reflex reminded me of the goodness and the simplicity that sweet gesture makes me feel.

Yet as the week has passed since we’ve been home I’ve pondered: does the act of waving have to live in such a dichotomy? Is it a Venn Diagram with an empty center circle or am I creating this image? In the last month, I’ve done more online shopping from our tiny cabin in the woods than I’d like to due to the sheer fact that I can’t just pop on over to any store to get what I need. I’ve brought the metropolis to me (my aching wrists can vouch for this). Further, while in Anchorage, I saw Steelhead swimming upstream in the most relatable of struggles: life. I walked in the woods by simply stepping off concrete and our pup bathed in waters minutes from our home away from home. 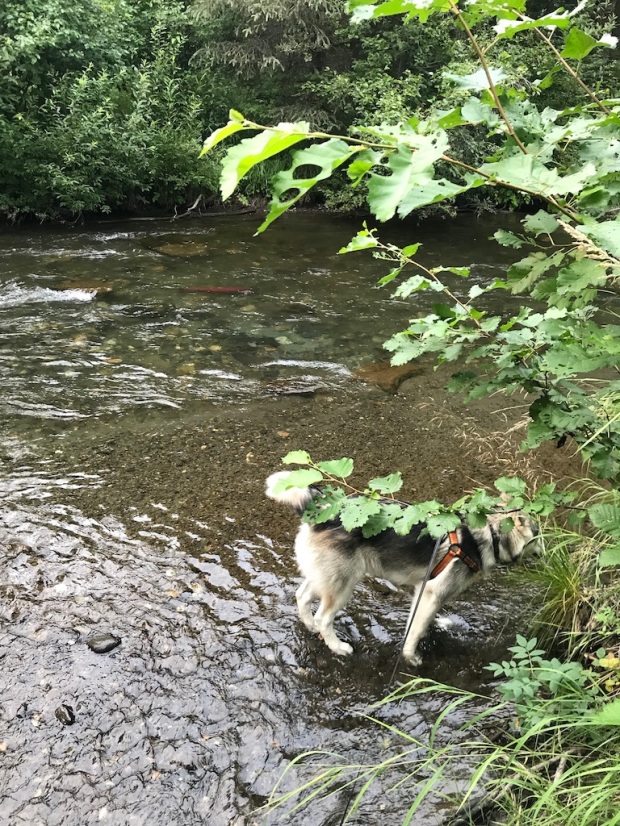 Can you spot the Salmon?

The city finds the woods and the woods are found in the city. They aren’t that separate after all.

It’s easy to feel solo in the city, to feel like your anonymous life doesn’t impact others. To sit in your car facing forward and never make eye contact. I’ve done it. I did it for a week straight. I shifted into city mode. Yet the reality is, we are all humans, always, anywhere, despite the veneer a city can provide to make us forget. And, of course, if I lived in the city I would have my familiar faces and places, I would have my people I waved to.

But that’s not the point.

The point is that our people are everywhere. In the city, in the woods. We are all impacting one another.

I’ll try it if you will.

Hello and goodbye to the sun

Speaking of waves, this gal is giving a momentary wave “Goodbye” until after our wedding dust has settled. So, until then I bid you adieu, with a wave, of course. 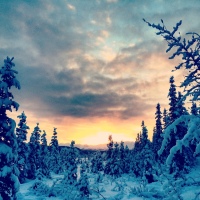 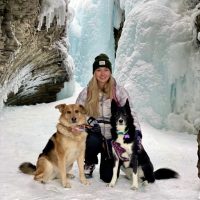