After the last two loss-filled years we’ve experienced, one lesson has climbed above the rest: everything changes.

However, despite its claim to #1 spot fame for me in the Top 100 Lessons of Grief, I have tried to ignore it, despite its shouts.

Shout it loud, but we ain’t listenin’.

The impermanence of it all has not left me in some zen-like state of acceptance. Quite the opposite. Rather, the worry that the potential for change has brought for me has left me in a sort of Henny Penny “The Sky is Falling” frantic permanence. Towards The Chief, towards our family, our friends, our little Leto. I considered all of the potentials for loss and tried to make every interaction left on good terms. Live each moment like it’s your last, etc., etc. you know the drill. I thought that perhaps my worry would safeguard us from more loss. Yet this had always been measured outwards, away from myself.

And so in all my worry, I had forgotten to fret about one thing: me, specifically, my face.

Don’t get me wrong, I’ve done a great deal of worrying about my face, I did, after all, attend middle school and high school in which I’d say more often than not, that people were unfortunately judged first on the constructs of their face rather than the content of their character. I did my best to dodge the disses and watched as beauty unfairly bargained the way for those she bestowed herself upon to the front of the line. Yet, as the years went on, I felt a flip of the switch.

In my 20’s, the first thing one of my boyfriend’s mother said about me when she met me was “She’s so smart.” It made me cry. I realized the tables had turned and I was in a phase of my life where the content of one’s character actually did come into play. It made me want to be a better person, smarter and kinder.

After moving to Alaska and Falling in Love Naked with Cauliflower Armpits I found a further reprieve from the standards of beauty I still (despite smarts or kindness) felt confined by. Although I enjoyed the routine of putting on makeup, I no longer felt required to do it. The choice became mine.

And so, these last few years I’ve worried less about my face. I’ve aimed to embrace my “sparkle lines” as my girlfriend calls my smile lines that ring my eyes and watch the changes that take place as marks of memories rather than the marring of time. 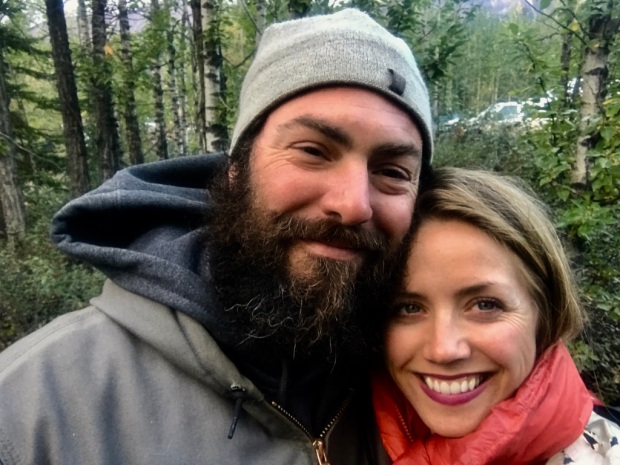 I guess I didn’t worry quite enough.

Early this Summer, after a lovely night planning our wedding menu with friends over probably a little too much champagne, I decided to impress my husband-to-be with a little acrobatics. We were headed home and after crossing The River, we approached The Gate.

My last picture of the night. On The Bridge, leading to The Gate.

This gate is one I’ve opened and closed countless times. We all have. Early in the morning, late at night, multiple times a day. It was high time I spiced it up. “Riding The Gate” is a term my fellow friends are quite familiar with. It refers to when one is opening The Gate and jumps on for a ride. The arm swings open and once it hits its full extension, the gate post sends you back as the car drives through.

Yet I had something different in mind. Something reminiscent of elementary school and flips on the parallel bars.

I took a running start at The Gate and by the time I hit The Gate’s full extension, my speed was such that I didn’t do a flip as planned but rather catapulted myself forward…

Straight down some feet below into a boulder below.

My body went limp and I came to as I felt the reactionary force dragging me and my open mouth backwards through the gravel. I stood up long enough to feel my mouth fill with a metallic taste and the sides of my face grow warm and then cool and decided that I should probably lay down.

I said out loud, to no one in particular: “I’ll just lay down for a moment.”

Needless to say, I hadn’t stuck the landing.

The Chief rushed to my side as I tried to comfort him.

“It’s fine” I promised. “I just needed to lay down for a moment.”

“It’s no big deal. I just need to spit these rocks out and I’ll be fine” I said as I started to get up.

“Julia, stay where you are. You are not OK. There is blood everywhere.”

At that moment, looking at him looking down at me, eyes wide with fear, I started sobbing. The bravado melted away. It was bad. I knew it was bad.

Other friends and acquaintances crossing the bridge pulled up behind us and ran in shock to our side. From the stifled gasps I could hear as they approached the scene I knew it wasn’t good. The Chief called the head Ranger of our park for backup and once he cleared me for a spine injury we decided to go back to our house to reassess. The entire group followed, all helping, all concerned, all planning our next steps.

We got home and I was determined to clean the wounds to see how bad it really was. The head bleeds a lot and I was still certain that a few bandaids later, I’d be on my way to bed. Our friends helped me warm water for rags. I wetted them and started to try to clear the embedded gravel from my face. The pain was excruciating. I kept trying but within seconds I started to feel like I was going to pass out. I was sick to my stomach from the pain. The Ranger offered to try as well and I sat on my hands on our couch so as not to bat him away in automated self-defense. He kept apologizing as silent tears rolled down my face. It was all we could do. We had reached the limit. We were done for the night.

Or so I thought.

“I’m calling the 24-hour hospital, I’ll let them know you’re on your way.”

Before I knew it, someone was making tea for me, another making coffee for The Chief as he fired up the truck and off we headed for a 5 hour trip into the wee hours of the night. Off to the hospital.

Well, this was certainly unexpected.

I waded in and out of sleep, the pain increasing with each opening of my eyes.

We arrived around 5 am to a team readied for our arrival. After trying for over an hour to numb the area (I am apparently one of those people who doesn’t respond to topical pain medication) I submitted to feeling more than planned for. Again, I planted my hands firmly under me as the doctor picked and scrubbed and irrigated everything from rocks all the way down to the glacial silt out of my face. Tears streamed, my stomach seized but a few hours later it was done.

The Chief took a 30-minute catnap as the doc finished the liquid stitches, leaning over me to spread the “good word” as he held the two halves of my face together while the glue dried.

5 more hours later, we were home. The Chief helped me into the shower and gently washed the blood and rock from my matted hair. He tucked me into bed and when I awoke, I thought for just a moment that perhaps none of it had actually happened. 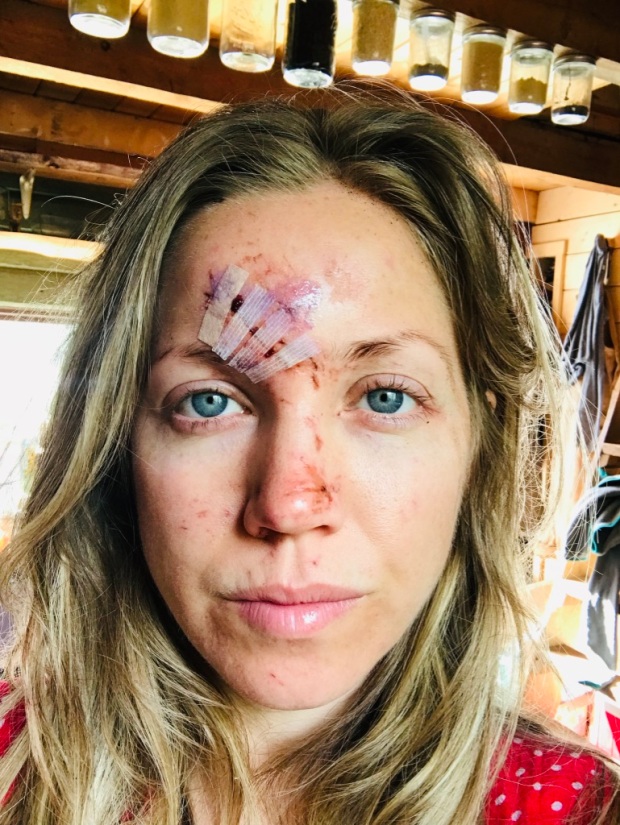 Good morning, sunshine! The morning we got home. Pre-shower.

A split second had changed everything. The face I had come to know and embrace would forever be changed though how it would be changed, I didn’t know.

Everything changes, even your face. 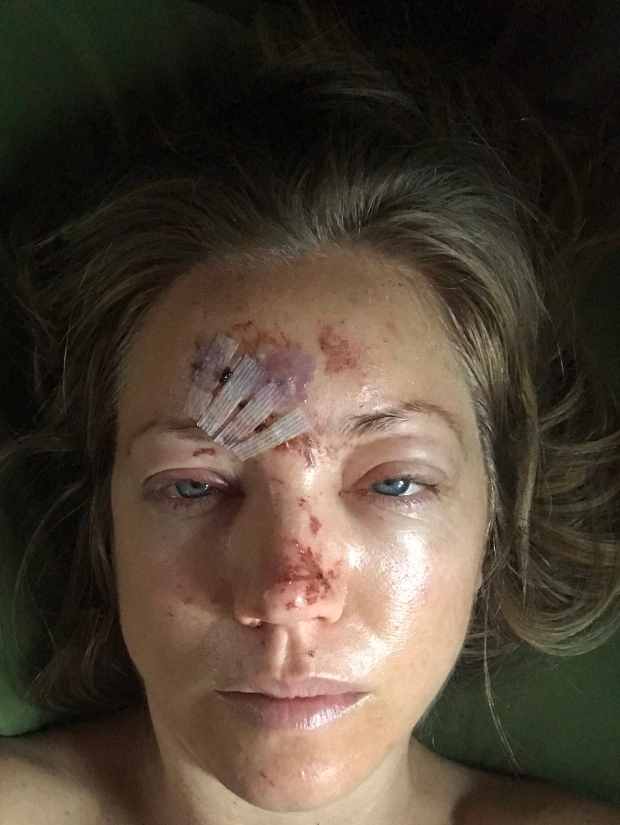 The next morning. Swelling ensued.

About five weeks after the accident, the final stitches melted away, the final scab fell and I stood face to face with my new reflection. 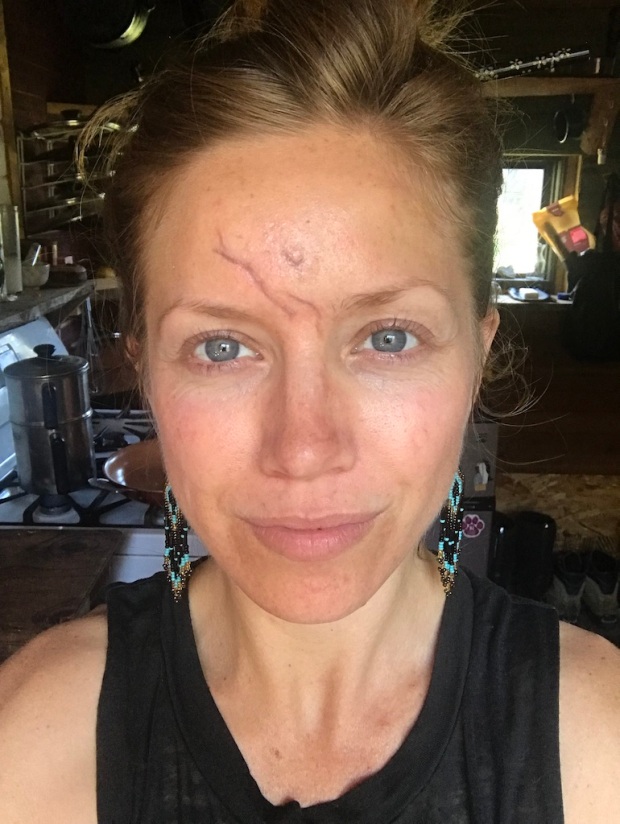 My first look. Not so worried about those sparkles now, eh?

When I first saw the scars I thought “That’s pretty badass” and that has been the overwhelming response from the crowd as well (another is that I look like the ultimate Harry Potter/David Bowie fan). It looks pretty tough and while Alaska isn’t a bad place to look like you can handle yourself, it’s not always the me I want to present. What if I want to look gentle or kind? My blank slate had been slashed. Or has it?

I’ll be honest, my road to acceptance has taken some turns and I don’t think I’ve arrived yet. In truth, it’s been a lot like the road of grief. Apparently, the universe wasn’t fond of my Henny Penny self and felt I still hadn’t learned the Everything Changes lesson, the lesson of impermanence and gratefulness and grace. I’m trying. Some days I love my scars. Some days I forget that they’re there. Others, I’m bombarded with Yikes! What Happened to You’s and it makes me remember.

Sometimes, they fill me with regret, with frustration and self-punishment. Sometimes, I wish I could just wake up and I would be the same old me. Sometimes.

Mostly, the scars make me remember to be gentle with myself. To remember how fast everything can change in an instant. To be grateful that more damage wasn’t done, that my eyes and nose and teeth are safe, that my brain wasn’t too terribly shaken. Mostly, appreciate my scars for what they remind, what they warn, what they promise. Mostly.

Always, my scars remind me that this too will change, as does everything.

The other day, my first Icelandic Poppy bloomed. It was brilliantly, joyously red. It unfurled, beaming with brightness, hope, youth. By the next morning, the colors of the petals had ever so slightly faded. A few days later, the last petal, still beautiful but more muted in her brilliance, fell.

All good and bad come to an end. What is to follow, we won’t know until we get there but chances are, you will be better off for it. And, if you don’t listen and learn the first time, the lesson won’t fade but will instead find new ways to tell you:

Everything changes (even your face). 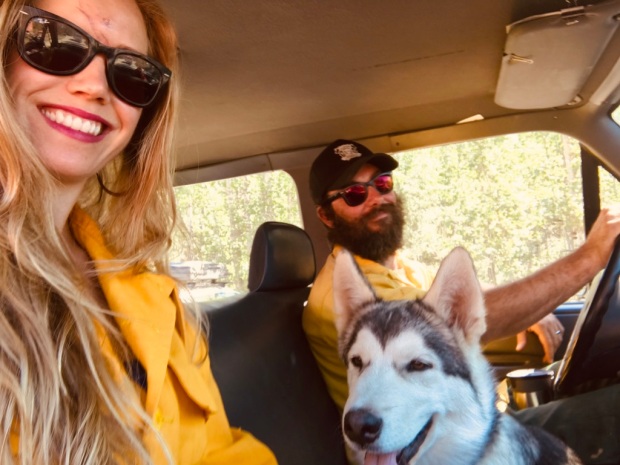