Two circles making three shapes to find out just what exactly makes You, You and Me, Me and all the in between which is Us.

This place puts Venn Diagrams into personal play more than anywhere I’ve ever lived in my life.

As much as I’d love to say that I spend time neither comparing nor contrasting (and certainly not with any self-judgment, right?) I can’t. I’d love to say it, I’d love to shout it from the mountaintops I don’t ascend like others here do (there I go) but I can’t. It would be a lie and you and I? Well, we don’t play that game with one another.

So, yes, I compare and contrast and in between the circles of all those C’s I can get well, a little lost.

Mid-Summer, I’m found. I’m in the middle of the play, mid-character. I’ve committed to my role in the production we’ve all silently agreed to put on and I’m playing it wholeheartedly, naturally without self-doubt, without rehearsal. There’s no time for renegotiation, it’s a full-bore, heave-ho expedition. But come The Shoulders, come the in-between seasons that shift everything, the diagram again comes into play. Again, the options start presenting themselves and they are as open as they are endless and in that simple set of shapes again, I can get lost.

The year’s last Shoulder (Shoulder Season) was Spring, which marked the influx of people both seasonal and year-round/year-round-ish. The Shoulders are what gets me. It’s the outlier, the time of change and suddenly in barges the Venn Diagram in it’s absolutely annoyingly punctual annual fashion. In came all of these people, fresh-faced and bushy-tailed, ready to go.

Go where you ask?

People here will randomly jump off a mountain to go paragliding, they will ride raging rapids to meet me at band practice or casually asks if anyone wants to go ice climbing. 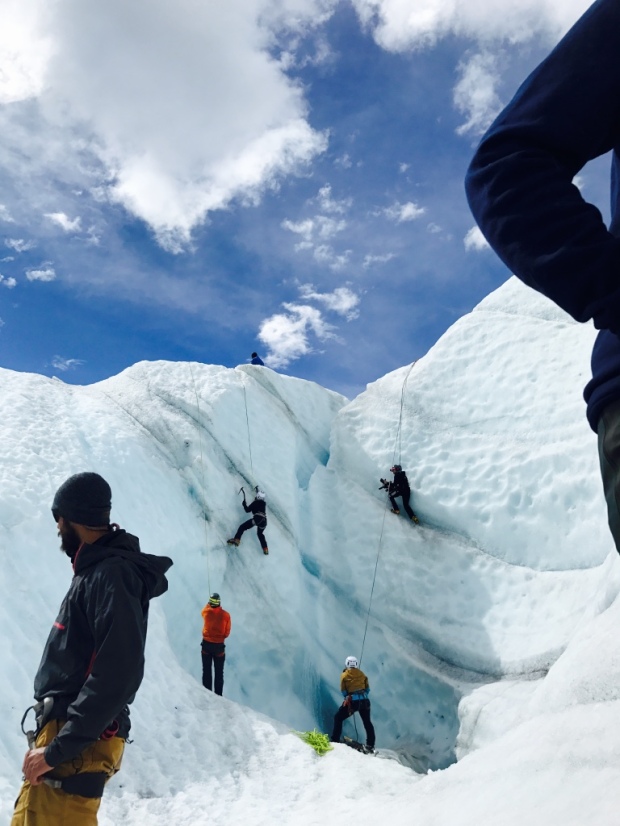 People here simply have a different level of normal and so, when the influx happens and my quiet Winter cabin life is no more and the rivers open up and the ground thaws and the stampede begins, everything changes and it brews in me a questioning and a comparison game that is about as fun as Russian Roulette.

You see, there are a million ways to live out here. You can have three months to kill in a seasonal job or be going on 3 years without leaving the home that you built from scratch. You can live near Town or out in “the boonies”. And that’s all just perfunctory housing plans. Once you’re here, every facet of life is full of options. There are endless ways to do each thing differently.

Take, for example, the dishes.

Despite how rude it sounds not to offer, there seems to be a sort of unspoken understanding regarding offering to do the dishes at someone’s house (though, after-dinner clean-up help is certainly appreciated). It’s not because we are a brash bunch of backwoods bumpkins with manners the likes of cavemen, it’s that we all have our own separate systems.

You do the two bath water basins. I do the one. You have a French Drain, I have a slop bucket. You have your system, I have mine and instead of spending the time teaching one another, we typically just do them on our own. And don’t get me wrong, we exchange ideas, we explain our reasoning, we learn from one another, we brainstorm. But we don’t typically let you do our dishes.

Now, the dishes don’t make me question myself like some other things, but you see now how down to the most minute detail our lives vary in intricacies I’ve previously not experienced elsewhere.

In California, most people had dishwashers or washed by hand but hot water was on demand and plumbing was an obvious “yes”. You’d have to ask where things went and where their compost was (because, of course, there was one), but for the most part, helping was straight forward, as was the functioning of the systems.

And so, on the most basic levels up to the most extreme, this place makes you think and re-think how you do things. Which, to me, is a beautiful thing.

Most of the time.

Until that beautiful thing grabs your arm and runs away with you in the deep dark Woods of Self-Doubt.

I already live in the woods which at times can be scary, but the Woods of Self-Doubt? Friends, they should have a warning sign.

Keep Out, Lest You Lose Your Way Back To Yourself.

X Marks the Self Spot.

So when the stampede begins and ends, I can accidentally grant myself access to those woods and lose my way. My quiet Winter self with routines and habits surrounded by maybe 20 others is suddenly shifted, jolted and before I have time to create new routines, in comes this influx of 200 new neighbors with their own agendas and new perspectives.

And I try them on.

Everyone seems to be an excellent something or other…

Why am I not a pro-rafter/ice climber/mountaineer/quilter/gardener/guitarist (does it not rub off after cavorting with these individuals for the last few years?)

Am I too lazy?

So, this year, when the influx flexed my brain and I started to feel a little wiggly, I tried to take it to the positive and to use that energy to do the things that can so easily slip away if not harnessed in the wild winds of the Summer’s passing. I decided to make a point to get out, to avoid the feelings of last year and to see what I wanted to see.

I went out to the glacier more times in the first month than I had all Summer the year before. I went ice climbing, packrafting and flying all in one day (a story still left to tell). The Chief and I made it to two out of the four mines here and I sat atop a ridge I’ve looked at for years, knowing for the first time what I’d wondered for so long: how it felt to get to the top. 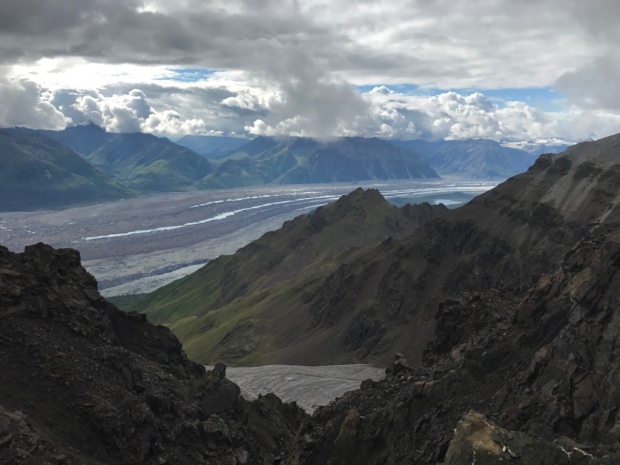 A view of the glacier I’d never known before. Don’t look down.

Needless to say, I’m still no mountaineer. But I love going for an adventure. I love the perspective and the challenge it brings. But I also truly love having a day in with The Chief, reading, and writing and eating good food. I love to spend time just sitting outside, watching the birds and talking to butterflies (boy, do they have a lot to say). I’m not an all the time extreme person. I’m a Julia Elizabeth Pancake Page. But sometimes I have to be pushed to extremes to get something through my head. Perhaps that’s part of the reason for the world sending me out here to a place where everyone is so different and yet seems to be very certain of exactly who they are is to realize who I am and then…be just fine with that.

And perhaps too, to realize that even those who seem certain, who can perform feats I didn’t even know were feats to perform, who seem to know exactly what is what and when, feel the Venn Diagramming on them as well.

Some of the most outstanding people I’ve known throughout all of my life have expressed just that to me. And maybe I just needed to head to the woods where there is rarely an escape from oneself to learn that truth.

Or at least lesson learning.

We all feel less than

We all judge the outcomes

We will always be surprised by the secret struggles of others and the lies they tell themselves.

And not the sweet little lies Ms. Nicks was talking about either.

As the Fall ushers us into Winter and things are slowing down around here the Shoulder starts again to try to take hold.

Plans are being formed. People are leaving to guide other rivers and patrol ski slopes and go back to school and travel the world and work in mines deep below the earth. People are setting out to let the wind carry them where it may. People are heading back to the daily grind. People are doing a range of things, yet again, like the last Shoulder, I’m trying to use this time to catalyze inspiration (travel bug, anyone? Yep, me).

Comparison, I’m realizing, verges more on the ridiculous than on the reality end of the spectrum. Even if our outer actions are the same, our inner worlds vary so much and are, from moment to moment, constantly evolving that it’s impossible to compare.

And so, despite the ease and simplicity of two circles and shared traits, I thought I’d point out to Mr. Venn that I think that when applied to life, his representation of shared similarities lacks the fluidity with which we move through this world.

And then, I did a little research and realized that despite my learning about Mr. Venn and his diagrams in Language Arts, they were actually formulated for mathematics.

And that, my friends, makes sense.

Be nice to you this week.

At each moment you are.

Be kind to you.

Because I’d be willing to wager you’re pretty awesome. 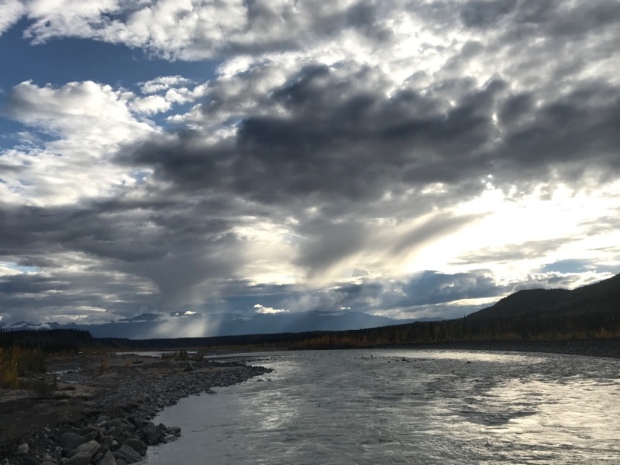 Hey girl…
Beach days. Leto hasn’t even made himself sick on seawater yet 🤘🏻🤮
Sunshine on our shoulders…
When you’re livin’ the work from home life in a tiny house and your family members need a nap but…the camera is pointed at your bed?
“Little psycho puppy, little psycho puppy” 🎶 has been our family anthem for this little floof. From a tiny polar bear to bigger than me, this cray cray has kept us laughing the last 3 years and certainly the last 3,000+ miles.
When you call the border patrol because you JUST realized your passport is about to expire and they say they MIGHT let you into Canada but can’t tell you for sure because it’s up to the border guard working that day so you pack you life up in a whirlwind 24 hours instead of the planned 5 days…this is the look of life on the other side. Sweet relief. Canada forever 🤘🏻🇨🇦 🤘🏻