I felt Death knocking and I bolted the door against her advances. I covered the cracks in the door frame, piled the furniture high and steadied myself against her pounding.

And all the while holding vigilant against her overtures, I scolded myself for my loss of optimism. I deemed myself cynical and paranoid and told myself to ignore my gut.

I hoped I was wrong.

And then she came in.

She pushed away our barricades as if they were nothing and in one fell swoop confirmed my worst fears in a swell of sadness that swept me away.

I lost my best friend.

On Wednesday after the worst week of all three of our lives, we made the hardest decision we have yet to make together:

We bid farewell to our Cinda.

Together we held her as she took her last breaths and together we wrapped her body in a blanket. Together we secured her onto the backboard her Dad had made for her. Together we said our goodbyes to those whom had kindly housed us in Town in our worst time.

Together the three of us went home.

The last time we had gone to Town, I had brought Cinda with me because I was concerned about her health. She and my Mom and I had piled into the truck that too was having issues. The ride there was quiet as a feeling of panic spread over me. I was paranoid about her health. Our town had already lost two dogs this Summer, I couldn’t handle her being next. And so I said a prayer over and over in my mind:

“If something has to fail, make it be the truck. Anything but my girl.”

And my prayers were answered.

Two days later Cinda and I had made it home with the help of a girlfriend and her trusty steed. Our truck hadn’t made it back but Lou? She was fine. The picture of health. It had been superstition after all. I had been paranoid and I had been wrong. I shook off the feeling of Death. We were together and she was healthy.

And that was all that mattered.

Cinda Bones scaling the glacial walls like it’s nothing.

There would be more trucks.

And then there was a new truck and The Chief went into Town to get it.

A few hours later Lou and I followed, catching a ride with a friend when I realized that her condition was worsening.

The whole way I again prayed to anyone and anything that would listen. I told myself Death was just taunting us, knocking louder now but that she could be quelled like the last time. She would stop. Cinda was at the top of her game. Svelte and happy and healthy. The Vet had told me so only weeks before.

Still I prayed over and over along the drive and in the week that followed. I offered up my own health, our home, money. Anything. Everything. “Please, take what you want. Anything but my baby. Please let her make it through.” 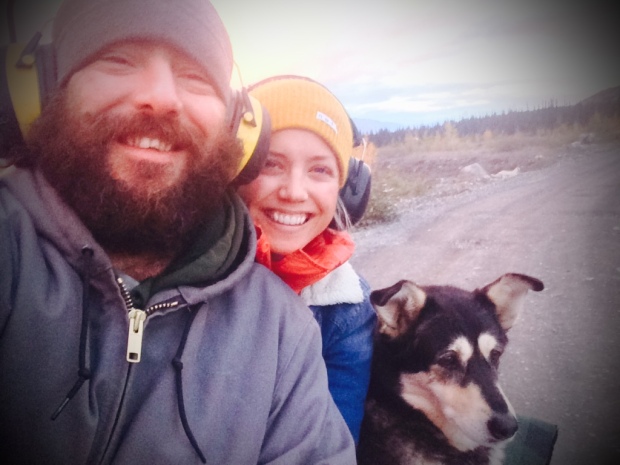 One week later, The Chief and I drove home together hand in hand in a new truck with our baby’s body in the bed.

We returned home to an oppressive feeling of emptiness and to the most painful full circle experience I’ve ever had.

When we walked in the door we were greeted by a dinner left for us by our neighbors and to a beautiful note of condolence. Those were the same kindnesses and love we had bestowed upon them only a few months before when they had to make the transition of walking through their doorway for the first time without their baby.

Life is cruel and beautiful all in one.

In the morning we awoke for the first time in our house without our baby.

You never realize the quiet until it comes.

We spent the day digging her grave. The spot where she and her Dad had slept together in a tent the first Summer they had lived on the property was where we laid her to rest. As we walked the property earlier that morning to find where she would rest, the spot had called us in and put its arms around us the way only the Earth can.

We dug until we were up to our shoulders in an earthen grave, until we had to help one another out, until we were sure she would be safe from the wilds of the woods.

All the while, her Brother watched over us. He had come over from next door and had greeted us with his head down and without so much as the twitch of his tail. He was solemn and stoic as he let us bury our faces in his fur. We sobbed into him. He slept beside the ever-growing hole that would be her grave and as I dug my heart was broken again and again as I would look up and catch a glimpse of his tail and think that it was hers.

And then as we left to prepare her body, her Brother left too.

We cleaned her and dried her and cried into her fur and then wrapped her again in one of her Dad’s blankets from their early days. Slowly we lowered her into the grave and said our final goodbyes. In the hours that followed we filled her grave with dirt and covered the top in moss and rocks and flowers.

Cinda was our first baby.

And she was my very best friend.

She was the reason I made it through my first Winter when The Chief worked all the dark day long and I was left in an unfamiliar place all alone. In the cold and the vast darkness she was my light and I was no longer alone. I talked to her more than anyone else. She waited patiently as I learned to ski and made me feel safe in the big white world I had found myself in.

Keeping me company while I organized totes.

She showed me around and taught me to navigate the place I called home. At every turn she would wait for me to make sure I wouldn’t miss it.

She was my best friend and I lost her.

I lost her and still, she is everywhere.

I hear her though she’s not there. I smell the way her paws smelled in fleeting moments and it taunts me. I find her fur at every turn. I see her footprints in the soft landings of the river’s shore.

I still look for her in her bed under the house every time I walk up the stairs and I wait for her to peek up at me over the table in our living room. My heart breaks in expectant surprise when I turn around in the kitchen and she isn’t there to sample what I’m making. I feel as if I’m just waiting to turn the corner and see her again, as though I’ve simply lost her and not that she’s lost her life.

She visits us in our dreams and in the memories of our Friend Family who have been there every step of the way to kneel at her grave and cry, to wrap us in their arms, to feed us and to tell stories that make us able to laugh again.

It’s a constant up and down whirlybird of a rollercoaster on a ride I never wanted to go on that I never paid admittance for. It feels as if we are here by accident, by a terrible joke.

This is our new life. Just us and the quiet.

Despite the despair and the pain that feel infinite it was worth it. I wouldn’t take back getting to love her in order to avoid this but I would do anything for more time together.

I love you, Cinda, dog of unflinching personality and infinite nicknames and lessons and love. There will never be another like you. Thank you for letting me be your Mom, for as one of your Grandmas said with a laugh: you didn’t have to let me be your Mom but you did.

Thank you. We will see you on the other side.

We miss you. So much.

Cheers to you, my love ❤️
The derp is strong with this one.
Looking for Spring 👀
A new post is up at BTB (link in blog).
Wild child ✨
Let that sunshine in 🌞